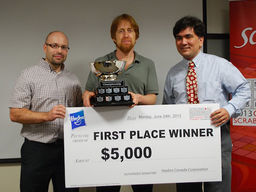 2016-02-29
Pre-announcement of event dates and venue to help players make travel plans. Please note that some details are still pending final legal approval, and that the qualification system is currently the subject of an Advisory Board appeal.

The CNSC is an invitational event for the top 52 players who qualify according to a qualification system (QS) maintained by the NASPA Canadian Committee. As described in the QS, competitors must play a minimum number of games during a qualification period (QP), be Canadian citizens or permanent residents and be members in good standing of NASPA. One place goes to defending champion Joel Wapnick, the next 51 places are awarded based on peak ratings.

Any tie games will be considered, as is usual tournament competition, a half game won and a half game lost for both players. If each player has 2.5 wins after five games, the player who has the superior point spread in the finals will be declared the winner. If both players have identical points spreads, a sixth game will be played with the player who went first in games 2 and 4 also going first in game 6.

Boards
Players must bring their own boards, but may if travelling from outside of the greater Toronto area arrange to borrow a local player’s board. If neither player in a scheduled game has a board, both may forfeit their game.
Racks
Racks will be provided at this event; players may choose to use their own racks instead.
Tiles
All players will be given a set of 2016 CNSC Protiles at registration. This year’s Protiles are white, with red print, and are square for international compatibility. Please check their distribution carefully before playing your first game; as per NASPA rules, no changes may be made once a game has begun. Games must be played using CNSC Protiles, but players may bring and play with Protiles from past CNSC events if they wish.
Tile Bags
Sam Kantimathi has kindly donated enough tile bags for each board, with the bags going at the end of the event to the winner of the last game. If you need to transfer tiles between bags, please count the tiles out of the bag onto the board before re-bagging them.
Clocks
Players are requested to bring their own digital game timers. A limited number of timers will be available on a first-come basis; if neither player in a game can find a clock, both may forfeit the game.
Scoresheets
A limited number of standard NASPA scoresheets will be available for player use, as well as plentiful supplies of blank paper.
Pens/Pencils
A limited number of writing implements will be available for player use, but we strongly recommend that players bring their own.