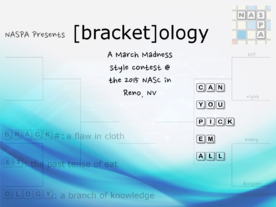 [bracket]ology is a contest to see who can best predict the outcome of the first year of bracket match-play at the climax of the inaugural 2015 North American SCRABBLE Championship in Reno, Nevada. Like the NCAA’s March Madness, whoever has the best bracket, wins!

Inspired by a member's suggestion, we are running this contest to take advantage of the exciting new playoff format being used at NASC. We are also always looking for ways to bring the entire NASPA community together in the spirit of friendly competition. This is a great opportunity for those who can't make it to Reno to be a part of the action!

[bracket]ology is open to all current NASPA members (membership paid through the end of the NASC). NASPA members will be able to log into Member Services to choose their brackets and make predictions. There is no entry fee. One entry per person.

To avoid conflicts of interest, all players must choose themselves in stage one of the contest and those players who reach the "elite eight" in their divisions will not be allowed to continue in the [bracket]ology contest.

How do I play?

Phase 1: Pick the Finalists! - from May through July, log in to Member Services on the NASPA website and submit your picks for the players you think will make it to the playoffs.

Don't worry if your predictions miss the mark - although there are prizes for this stage of the competition, your score for phase one will only be used in the event of a tiebreaker in the main event of [bracket]ology.

Entrants receive one point per correct prediction, for up to 16 possible points. All Division One players must choose themselves among their top eight. In the event that a player neglects to do so, the system will automatically replace the lowest rated pick with said player.

In the event of a tie, total correct predictions across all divisions will be used as a tiebreaker.

You can change your picks throughout the summer. All picks are locked at 11:59pm PST on July 31, the day before NASC play begins.

Phase 2: The Brackets! - Once the top eight are set, the online system will reopen for NASPA members to choose their predicted outcomes for each division (six divisions total). Once again, NASPA members will log in to Member Services and fill out their brackets. Computer terminals will be available at the NASC after Monday's games. Entrants receive 1 point for a correct quarterfinal prediction; 2 points for a correct semifinal prediction; 4 point for a correct finals prediction, for a grand total of 72 points.

All picks are locked at 8:59am PST before day four of games begins.

Payouts listed as attendees / at-home entries. Players can win more than one prize.

[bracket]ology is presented by the NASPA Social Media Committee